in may 2009, i spent a night at kitt peak national observatory, the largest on the planet, to take a picture of IC 5067. IC 5067, also known as the pelican nebula, is 2000 light years away on our spiral arm of the galaxy, the orion arm. it is approximately 15 light years across, and an active region of star formation.

the picture was taken on a 0.5m telescope with a SBIG STL 6303E CCD camera, cooled to -15C. exposure time was 40 minutes each for red, green, blue and 2 hours for luminance. 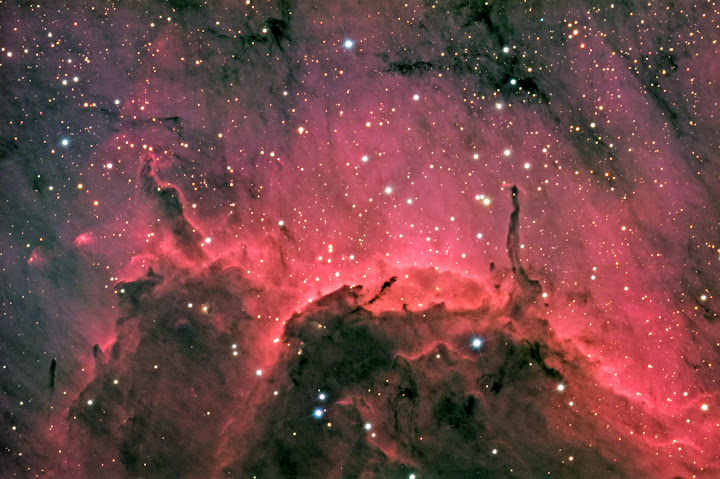 recently i was minding my own business playing around with the latest feature extraction technology, when i realized that my two best friends are actually one person.

this morning, when returning to my laptop, it had the following in a fullscreen editor window:

i spotted this sign at gettysburg national cemetery. this strikes me as the perfect sign for my office door

Some four hours drive from Axum – plus a further two hours stiff uphill walk from the point where the road ends – lies the spectacular monastery of Debra Damo, situated on an isolated cliff top in one of the wildest parts of Tigray.
Damo is unique and unforgettable although, as with most Ethiopian monasteries, women are not allowed to enter it. Even so, there is a daunting obstacle to the monastery: the only means of access is a climb of twenty-five meters up a sheer cliff. Monks lower a safety rope which visitors tie around their waists. Then they use a second, thicker rope to climb with. Some may reflect, as they make their way to the top, that because of this arduous, dangerous ascent the art treasures of Debra Damo have remained intact through the monastery-s 1,400 tumultuous years of history.

when the history channel is not showing yet another nazi documentary (yawn), it’s pure crack.

today, we went to the improv in cambridge, and sure enough, i ran into jason pratchett from somethingpositive. it’s eerie to run into a cast member of a comic strip you follow..

sarah just sent me this, with a stern face:
YOUR FRIEND OR CO-WORKER COULD BE A SPACE ALIEN, SAY EXPERTS … here’s how you can tell (by Michael Cassels of the “National Inquirer”)
Many Americans live and work side by side with space aliens who look human -but you can spot these visitors byy looking for certain tip-offs, say experts.
They listed 10 signs to watch for:
1. Odd or mismatched clothes. “Often space aliens don’t fully understand the different styles, so they wear combinations that are in bad taste, such as checked pants with a striped shirt or a tuxedo jacket with blue jeans or sneakers,” noted Brad Steiger, a renowned UFO investigator and author.
[OR, SAY, CLOTHES THAT DO NOT FIT PROPERLY AND ARE NOT MATCHED BY COLOR AND MAYBE THE PANTS ARE TOO SHORT OR DO NOT BUTTON]
2. Strange diet or unusual eating habits. Space aliens might eat French fires with a spoon or gobble down large amounts of pills, the experts say.
[YEAST. ALL OATMEAL ALL THE TIME.]
3. Bizarre sense of humor. Space aliens who don’t understand earthly humor may laugh during a serious company training film or tell jokes that no one understands, said Steiger.
[YOU MAKE MANY JOKES I DO NOT UNDERSTAND.]
4. Takes frequent sick days. A space alien might need extra time off to “rejuvenate its energy,” said Dr. Thomas Easton, a theoretical biologist and futurist.
[OR PERHAPS CANNOT WAKE UP EARLY AND MUST LIE ABOUT IN BED FOR HOURS BEFORE GETTING UP FOR WORK]
5. Keeps a written or tape recorded diary. “Aliens are constantly gathering information.” said Steiger.
[ONE WORD: BLOG]
6. Misuses everyday items. “A space alien may use correction fluid to paint its nails,” said Steiger.
[GREGOR + HARDWARE = BAD SCENE]
7. Constant questioning about customs of co-workers. Space aliens who are trying to learn about earth culture might ask questions that seem stupid, Easton said.
“For example, a co-worker may ask why so many Americans picnic on the Fourth of July,” noted Steiger.
[WHY ARE AMERICANS SO FAT? WHY IS THE U.S. GOVERNMENT SO STUPID? WHY DOES EVERYTHING CLOSE SO EARLY?]
8. Secretive about personal life-style and home. “An alien won’t discuss domestic details or talk about what it does at night or on weekends,” said Steiger.
[ONE WORD REVISITED: BLOG]
9. Frequently talks to himself. “An alien may not be used to speaking as we do,so an alien may practice speaking,” Steiger noted.
[PRETENDS TO BE SPEAKING A “SECOND LANGUAGE” SO SLIP UPS CAN BE EASILY EXPLAINED AWAY]
10. Displays a change of mood or physical reaction when near certain high-tech hardware. “An alien may experience a mood change when a microwave oven is turned on,” said Steiger. The experts pointed out that a co-worker would have to display most if not all of these traits before you can positively identify him as a space alien.
[EXPOSURE TO SHINY SOFTWARE INCREASES YOUR PULSE QUITE DRAMATICALLY]
I am going to sell my story to the newspaper and then harvest your organs for our scientists to study.

it seems that i have become a character in a remake of Atari’s (formerly Microprose) turn-based strategy classic: X-COM: UFO Defense in a new game entitled Xenocide.

my nomination for the 2005 darwin awards